As I’ve said, working in the water with color revealed new dimensions, depths, and interpretations to my work. Differences in color temperature of light above and below the surface of water revealed distinct variations that were totally unexpected, allowing me to see the same subject matter I’ve been working with for over 25 years in a totally new way. The color also gave form and context to certain aspects of the body and it’s reflections, things that were more abstracted by black and white.

After photographing with color under water for 2 years, I decided it was time to explore how color would impact the mirror work. 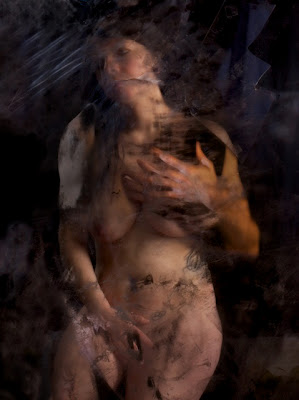 This is a fairly recent image since starting work with the mirrors again a few months ago.  I think the color has a similar effect on the mirror work as it did in the water- it defines a lot of the forms that were previously annihilated by black and white. The color brings with it an element of reality, and along with the notion that photography is automatically taken as truth, creates a tension with the bizarreness of the rest of the image.

The image above is one of my favorites that I’ve seen in the mirrors so far.  A lot of the latest mirror work has had an undeniably classical religious quality to it, which is a surprise to me, because I’m not religious.  When I go into a shoot, I don’t have an image in mind, or even an idea of what I want to convey.  After seeing this image, I couldn’t help but think that not only did it feel classically Christian, but that it reminded me of something in particular.  And then it struck me: 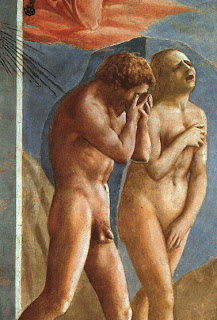 This is from  “The Expulsion from the Garden of Eden”, by Early Italian Renaissance painter Masaccio.  I was so surprised to see the similarity not only in the gesture, but in the overall expression.  There’s something about the articulation of the image that feels very similar as well, something about the graphic quality…

A good friend of mine came by the studio and had a similar reaction to the image, but a different painting in mind: 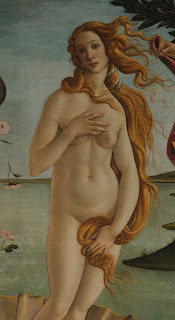 “The Birth of Venus”, by Sandro Botticelli.  I though it was so interesting he had such a different association with the expression.  The gesture is the same, but the overall feeling is so different than the one in “The Expulsion”.  It’s also a bit more of a contrast stylistically, but definitely similar.

I wouldn’t be surprised if there were other works of art, particularly with the same kind of notoriety as the two given here, that share similarities.  What I find so interesting is that I hadn’t planned this prior to making this image, rather, it was discovered after the fact.  I also love that my friend could have such a different, but equally relevant, interpretation and/or association with an image that is just as much a surprise for me as for anyone else.  I feel like that is one of the advantages of working intuitively, that it can lead to these wonderful discoveries, and bring up more interesting questions.

Working With Color in the Mirrors

Tagged on: color photography    intuition    Masaccio    mirrors    painting    references to mythology    Sando Botticelli    The Birth of Venus    The Expulsion from the Garden of Eden