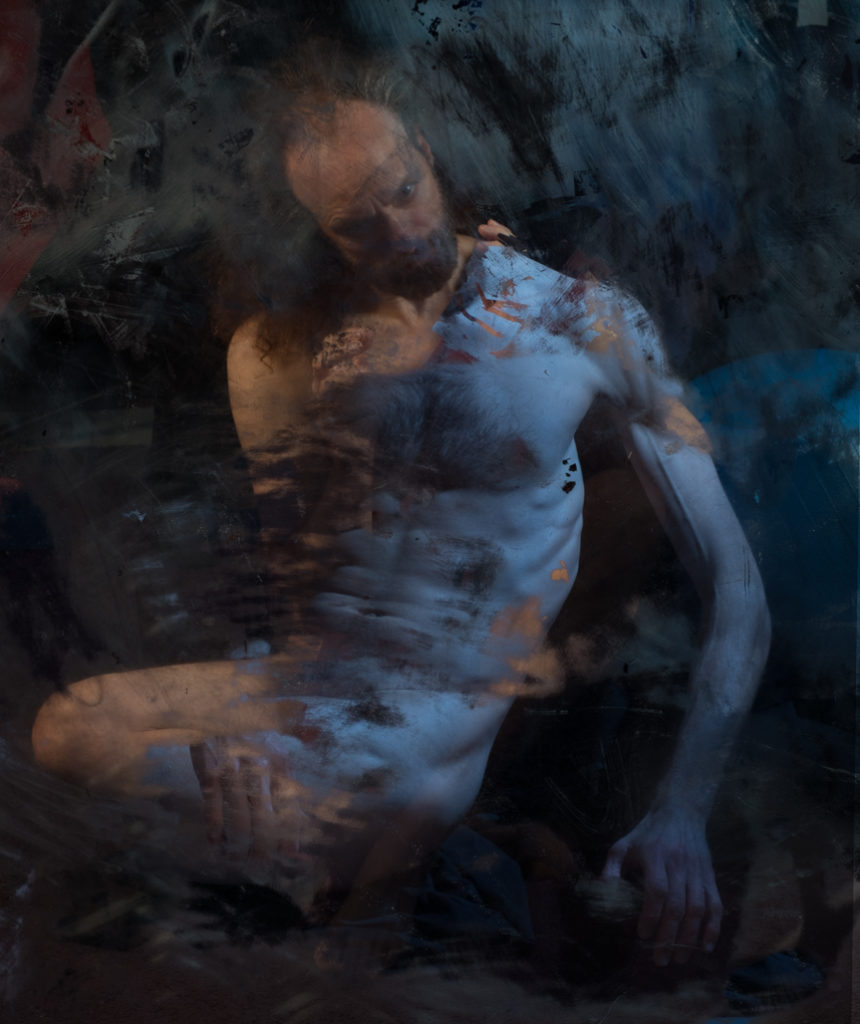 Untitled #1-22-15-288 is another recent image from my last “binge shooting” session with Carl and Cory. The figure is deformed, with its legs appearing as stumps and an odd sensation that his body is caving in on itself. He is in transition, caught in a spontaneous moment of struggle as his body morphs into something else, perhaps a corpse?

Many of the images from this shoot are quite dark, but this is nothing new. Darkness has always shown up in my images, especially in working with the mirrors.

In 1991 I had the good fortunate to meet Stanley, a young schizophrenic man, and I asked him if he wanted to model for me. When I showed him my work and talked about what I wanted to do, he enthusiastically agreed to be part of the project.   We had a weekly appointment to photograph.  I would show Stanley the images we had made the week before, and we would talk about them: what they meant to me and what they meant to him.  We talked openly about the psychological quality of the work, and about his condition.  I realized that his personal experiences could push my work to a new level. The conversations we had offered me insight and understanding into both Stanley and the photographs.  Stanley and I worked together for about a year, and the images we made grew deeper and darker as the trust and understanding between us grew. 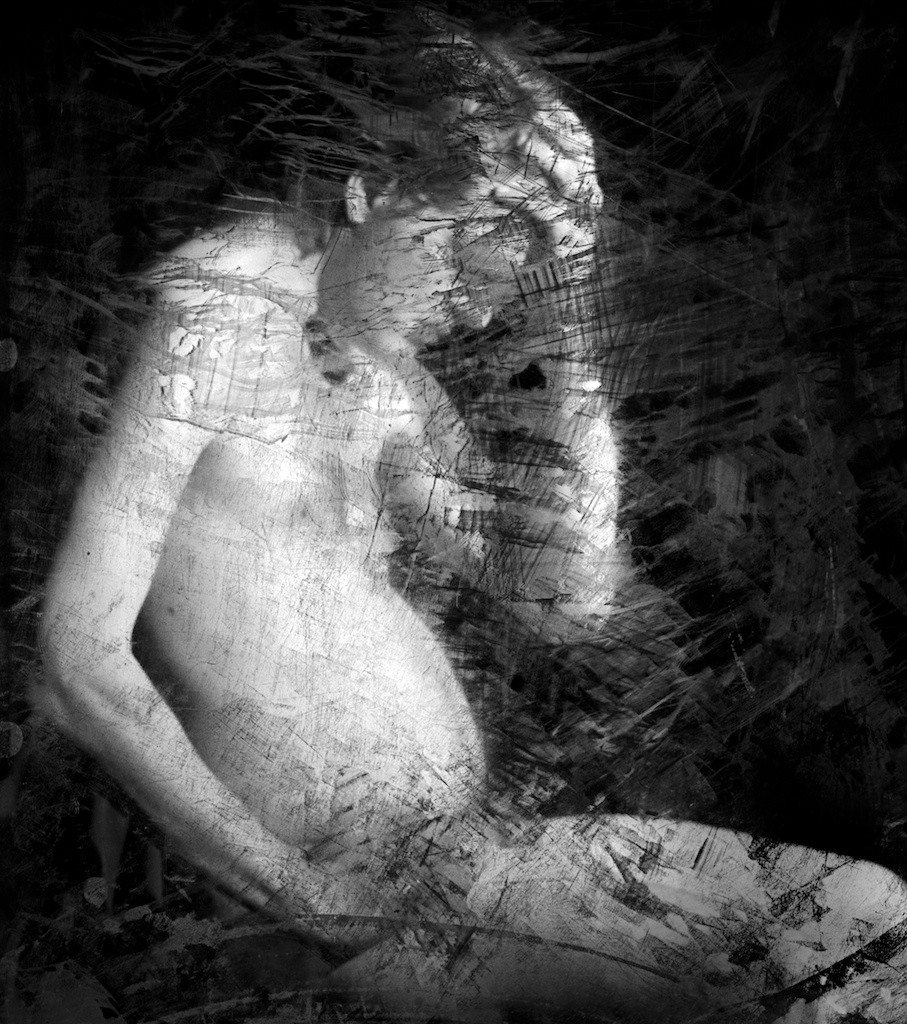 Photographing Stanley alone, without another model, enabled me to concentrate on just him.  I worked with integrating his position and gestures with the marks on the mirrors, as in Untitled #3757.  I had always admired the way that painters could be expressive with the way they applied the paint and realized that the marks on the mirror could also be quite expressive, especially when combined in a visually striking way with the gesture of the model.

I cannot explain how these images came to be so psychologically challenging.  Initially it was not easy to photograph Stanley: I did not want to pose or direct him too much, and he wasn’t sure what to do or how to move.  As a way to diffuse the awkward tension that was building between us, I suggested we put on some music.  Stanley loved the idea, and picked out what he wanted to listen to from my collection.  He immediately began moving with the music, and I encouraged him to relate to the marks on the mirror as he did.  He was creative and an artist, so his gestures were interesting to me.  Often I would ask him to stop, move this way or that, purely responding to the visual elements, trying to further integrate his body with the lines and marks on the mirror.  Stanley did not filter himself, he had a direct and genuine quality.   Because of his disease, he wore no public mask, so he often exposed what most people hide, leaving him raw and vulnerable. In a fascinating sort of dance, I was reacting on a visually intuitive level to his equally intuitive movements.

The symbiotic dynamic between Stanley and me led to some dark and challenging images, further enforcing the power of an intuitive creative process.  I felt these images came from someplace outside of myself.  I have known darkness intimately throughout my life, and the emotions I felt from these images were not alien to me.  At that particular time, however, they did not feel like they were mine.  I was not having any crises when these images were made; on the contrary, I was happily in a relationship and pleased with how my career was going.  There was no angst in my life at the time.  Neither were the images a recording of Stanley’s psychosis;  he was not having a breakdown when we were working together.  We never tried to illustrate the expression of any particular emotion or psychological condition, and the images consistently surprised me.

The painter Piet Mondrian (1872 – 1912) expressed the experience this way: “The position of the artist is humble.  He is essentially a channel”  – accessing an expression from a deeper place, or what Jung would call the collective unconscious.  This is exactly what was happening when Stanley and I shot together.  The darkness and intensity of the images we produced was unintentional, but expressed real and recognizable pain.  Once again, letting go of trying to consciously control the meaning of the image, rather letting my eyes lead and using the camera as a tool to explore, opened me to the power of intuition. 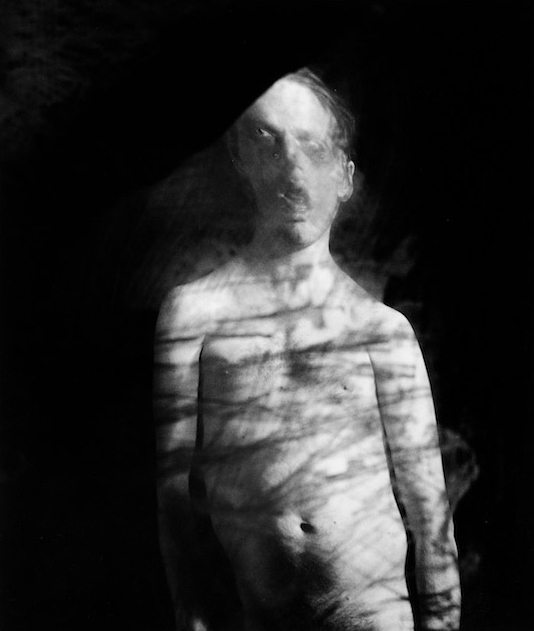 The session this image (#3725) was made was like any other shoot with Stanley—spontaneously creating the experience and the images together.  He danced with the music we had playing while I worked on incorporating his movements in a visually cohesive way with the marks on the mirror.  Yet this image takes us over the edge of sanity, into a type of psychosis, a disorienting place full of unimaginable terrors where the protective masks and the egos are demolished. The word psychosis is literally a disorder of the soul. This image illustrates an agonizing condition, a spiritual crisis of prolonged darkness and profound loneliness Christians refer to as the “Dark Night of the Soul”.  The figure could be the embodiment of evil, a contortion of the soul so twisted the essence becomes perverted into malevolence.  It is shocking and disturbing because we all recognize this state, whether we want to look at it or not.  Perhaps this makes it uncomfortable because it forces us to confront the potential evil in all of us.  Untitled #3725 does not refer directly to the darkest moments of my life, or of Stanley’s, but of darkness itself, the darkness we all know.

This is the power, and also the danger, of the intuitive process.  It does, if followed, eventually lead directly to some deep, core stuff, and that core stuff can be quite dark. I have often been tempted to turn my back and quit; the process has been hideously difficult at times, uncomfortably revealing at others.  It has also been the most profoundly satisfying endeavor that has opened up the world to me and brought my life meaning and great joy.

The Challenge of Darkness