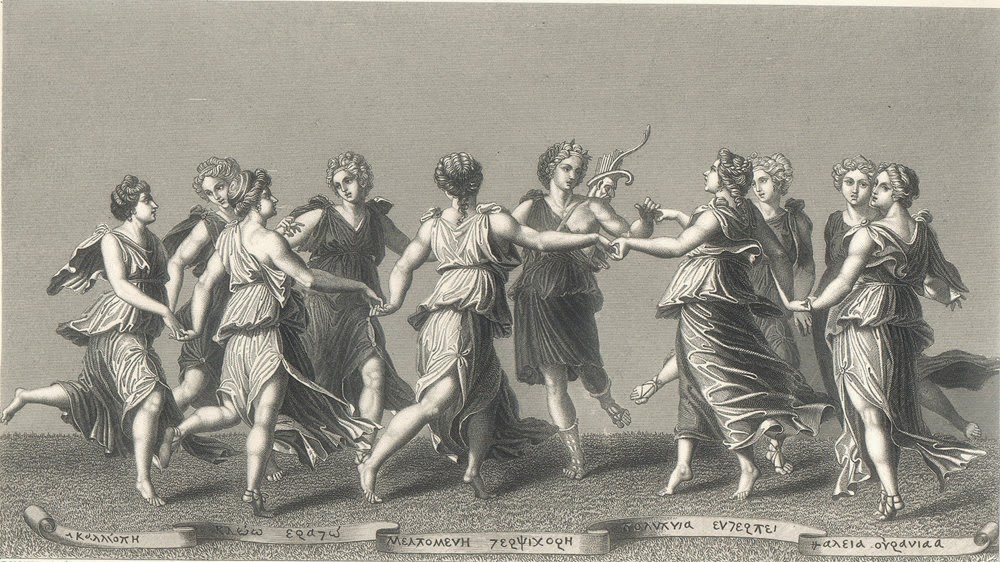 The Muses, daughters of Zeus and Mnemosyne, were Greek goddesses of inspiration in the realms of literature, science, and the arts.  Originally there were only three Muses, embodying song, practice, and memory, but the number eventually expanded to nine to further personify literary and artistic wisdom.  Poets in Ancient Greece would invoke a Muse or Muses for assistance and insight, essentially seeking to become channels for them to sing through.  One of the most well known examples of this is when Homer calls upon the Muse to ask for help in telling the story of the hero in The Odyssey, saying: 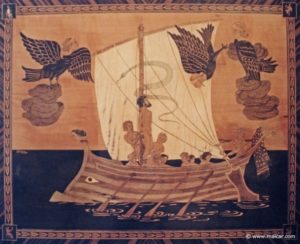 “Sing to me of the man, Muse, the man of twists and turns
driven time and again off course, once he had plundered
the hallowed heights of Troy.”
(Robert Fagles translation, 1996)
The etymology of the word muse is fascinating in and of itself.  “Muse” comes from the Ancient Greek “Μοῦσαι.”  Not only does it identify the goddesses of inspiration, but in a broader sense has also become a way to refer to someone–or something–that inspires.  By the Renaissance, a muse could be an artist’s favorite model or even lover, a title we still make use of today to describe the motivating qualities of a significant other.
As a verb, to “muse” is to be absorbed in thought or to deeply consider. To “amuse” someone is to divert their attention, entertain them, and/or cause them to muse.  Amusement typically inspires laughter and mirth.  “Bemused” is similar in implying an aspect of thoughtfulness, but usually inspiring it with a more puzzled or bewildered sense.
“Muse” is also the root of words relating to or describing some function of the arts.  While it has become solely used to identify the production of harmonious sounds, the word “music” is derived from mousa, and in Ancient Greek “mousike” meant any of the arts related to the Muses.  And of course, a museum is a literal “house the Muses”.
Lee Siegel wrote an excellent piece in The Wall Street Journal in reference to a 2009 MET exhibition entitled “The Model as Muse”.  In it he discusses the evolution of the muse throughout history, from Ancient Greek goddesses to modern day pop icons.  He also questions the current status of the artist/muse relationship, asking “Who, in our proudly individualistic culture, wants to feel like a valet to someone else’s imagination?” He touches on some great ideas, and it seems to me that the article points to a larger issue taking place within the contemporary art world, namely that we have forgotten the value of the muse in today’s art.
When the Ancient Greek poets sought to become a channel for the Muse, they were seeking truth beyond what they were capable of consciously suggesting by conjuring it from one or all of nine personified goddesses of artistic inspiration.  This seems to me a stark contrast to many of today’s artists, where ego has come to play a much larger role in creating works of art.  Instead of reaching to a higher level of truth, much art today serves to express the artist’s personal feelings, thoughts or political views.  The art that is celebrated nowadays seems also to have shifted to the ironic and the conceptual-“Con Art,” as art critic Julian Spalding refers to it.  We are no longer seeking higher human truths that connect us to one another, ourselves, and our humanity, favoring instead the witty and the clever.  Many museums featuring much of contemporary art no longer have the magnificent quality of “housing the muses”, instead highlighting work that is often alienating and isolating.  Perhaps the role of the museum has changed over the last several decades, from showing work that is inspired or inspiring to documenting the latest art star and the ever changing fashion of art.  Truly challenging art seems to have been replaced by work that is either excessively innocuous or shocking and sensational–very different ends of the same shallow spectrum and equally uninspired.
I think there are many reasons for this shift in values and the loss of the muse.

As an artist, teacher, and funder of the arts, I’ve come to see the contemporary art world from several perspectives and it has given me a unique point of view into some of these areas that I see as problems within it.   I’d love to have the opportunity to open up a dialogue about some of these issues and share further musings on the rich and complex world of art….