The mask has been used throughout history not only as a way to disguise oneself but a means to project a different persona.  Early cultures and civilizations used masks in sacred ceremonies as a means of channeling spirits and/or gods.  Ancient Greeks introduced masks into theatrical productions to hide the individual and personify their character.  Masks continued to be used in miracle, morality, and mystery plays throughout the Middle Ages, as well as in sacred dramas in Tibet.  Today, party goers at cultural events like Mardi Gras and Carnival become unencumbered by their typical inhibitions behind the guise of their masks, and protesters have made use of the Guy Fawkes mask from the movie “V for Vendetta” as a symbol of opposition and anti-establishment.

Psychologically, we hide behind masks every day; in the way we present ourselves to the world, act in certain situations, and conduct ourselves within a given environment.  We may use masks to hide our deepest, darkest fears, or we may use them to reveal our truer, inner selves.  Oscar Wilde said “Man is least himself when he talks in his own person, give him a mask and he will tell the truth”.
I’ve always been fascinated by the powerful symbols that masks can be, and the phenomenon of transforming oneself with a mask.  The theme of the mask has been consistent throughout my work from very early on.  From a very early age, I had struggled with identity issues.  I was confronted with the realization that I loved other girls at age 11, at a time when the masses considered homosexuality a perversion, and was wrecked with feelings of being an outsider.  I feared I was a pervert, a freak, and an outcast.  Fearing I was destined to be lonely and unfulfilled for the rest of my life, I vowed to hide my true self and my secret at all costs.
Then in 1972, as a young student at MICA, I had created this self-portrait: 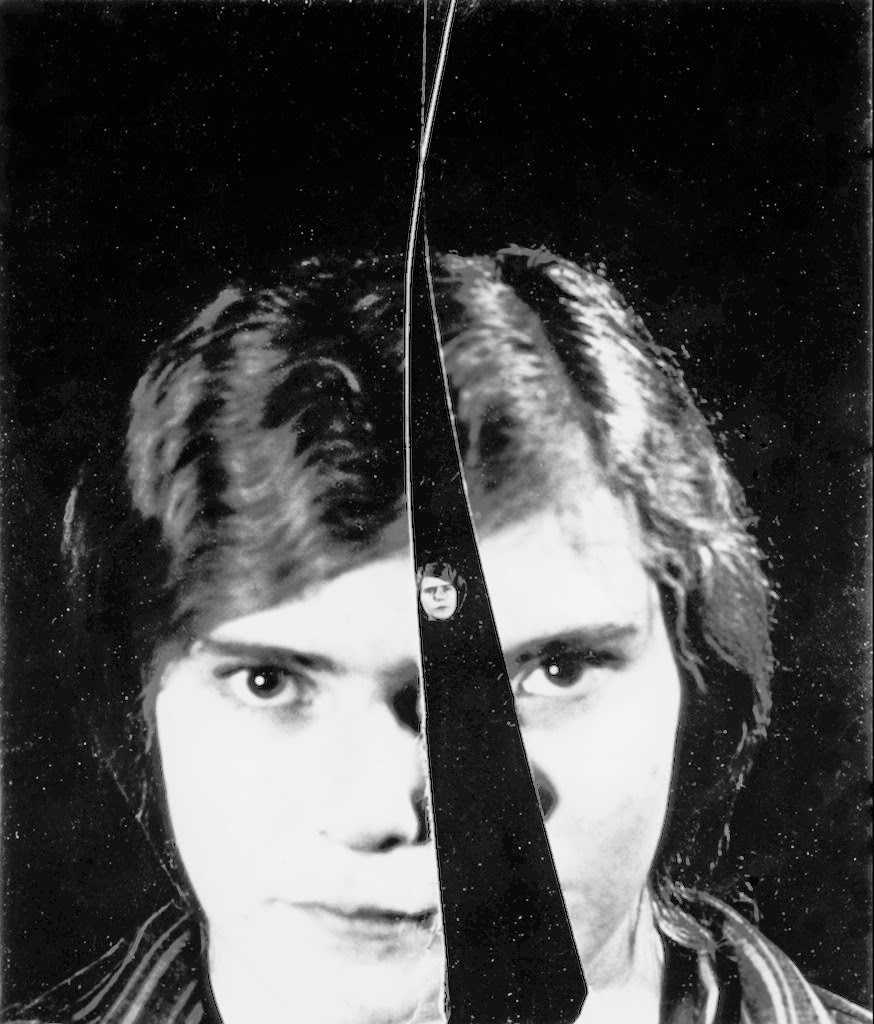 I had been experimenting in the darkroom by cutting, scratching, and burning negatives.  For this image, I cut the negative in half, put it in the enlarger, and projected it onto photographic paper.  The little Connie inside the split was a cut-out face of me from a different negative that I put directly on the photographic paper during the exposure.  By cutting the negative, I inadvertently cut the symbol of my facade or public mask in half to reveal the little Connie that had been stored away.

It wasn’t my intention to make an image that made a revealing statement about myself or my secrets, I was simply playing and experimenting.  It took me years to even grasp the full significance of what this image meant.  Although it was technically crude, this was the first time that I used the symbol of a mask.  Throughout the course of my work, the archetypal symbolism of masks have re-emerged again and again, sometimes in the water: 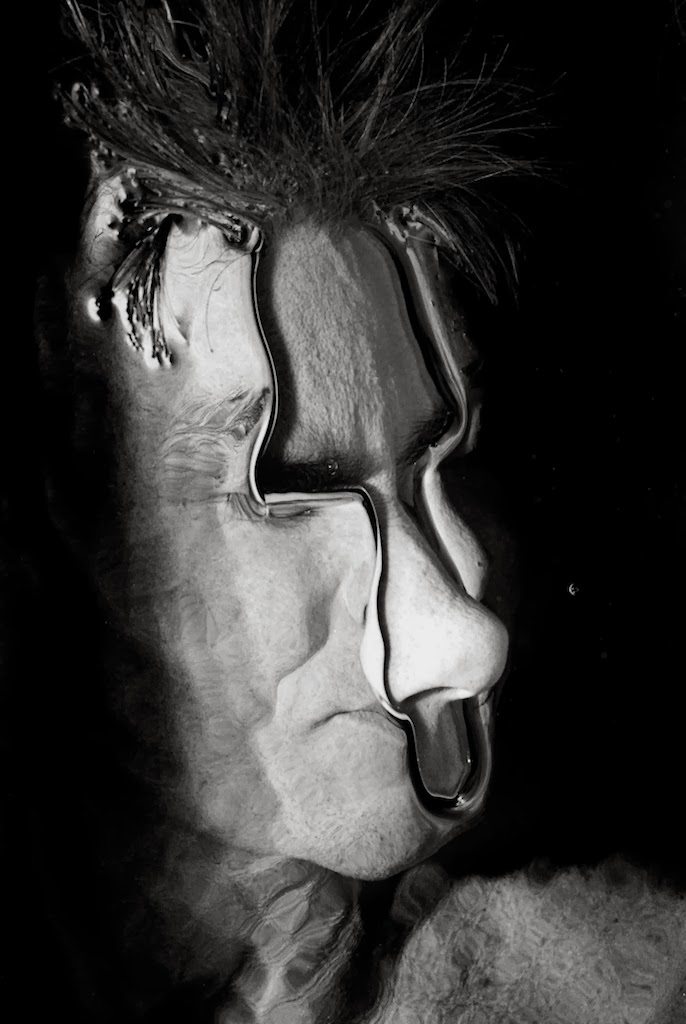 But more often, and more reminiscent of the early cut negative self-portrait, in the mirrors: 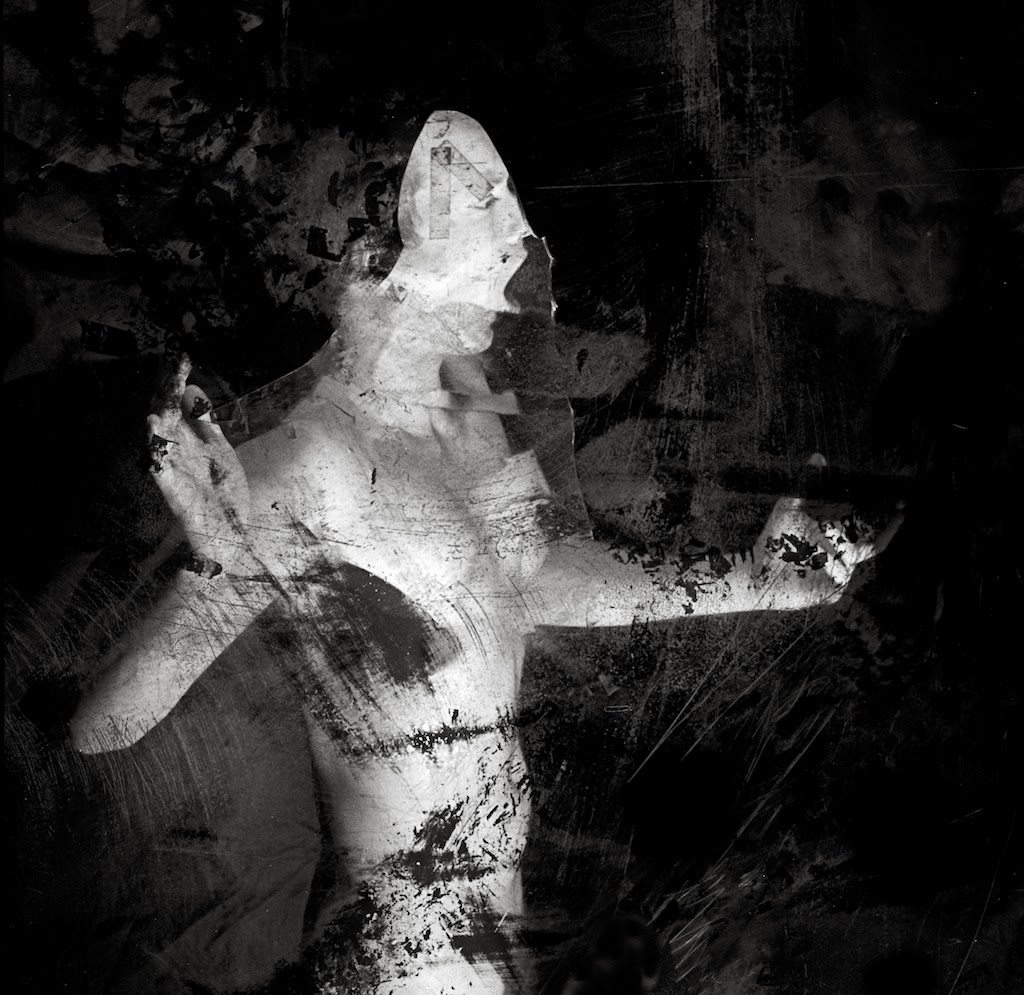 I’ve been thinking about this recently because one of the latest images shot in the mirrors has a very strong feeling of a figure removing a mask: 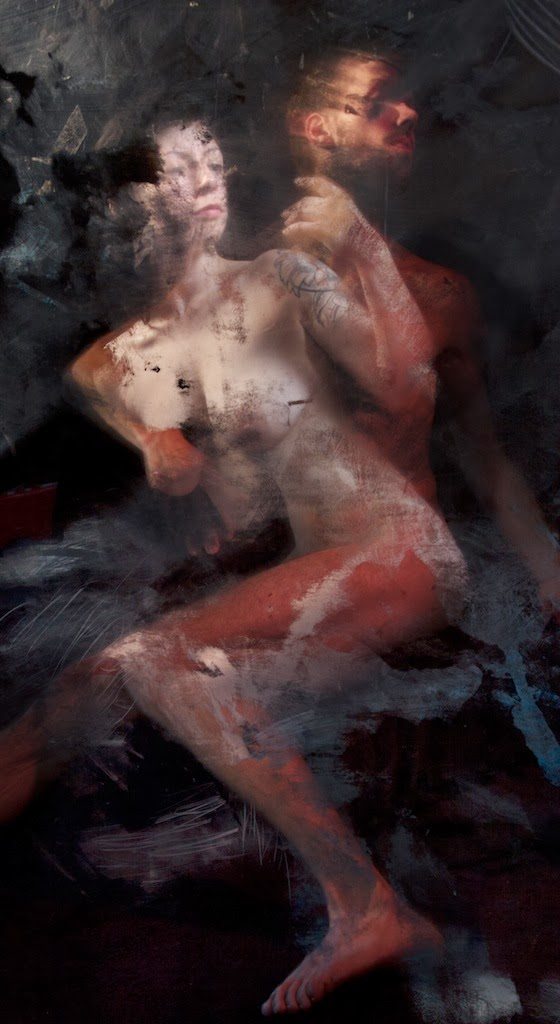 I love the gesture in this image- the way she seems to be holding the mask as if just revealing her confident and clear self beneath.  The mask is almost ephemeral, even though she clearly has a grasp on it, and I love how it has the feeling of a full face masquerade type mask.  There’s a sort of twisted elegance about her figure, and the way she has exposed her true self feels very natural, despite the overall bizarre quality of the image.

Whenever the appearance of masks have come up in my work,  it is always in the form of layers, both visually and symbolically.  I’ve often interpreted them as conveying psychological layers, representing conscious and unconscious elements, revealing deeper levels of understanding and awareness.  Carl Jung said that “the persona [mask] is that which in reality one is not, but which oneself as well as others think one is”.  In many of these images, I see layers of the psyche being either exposed or hidden, the persona being projected or revealed through the presence or removal of the mask.  Continuing to work intuitively, it is always exciting to see common threads like this resurface in my work throughout the years…