Last week, I gave a lecture and presentation on my work as a guest at The Annenberg Space for Photography in Los Angeles. The slide talk went very well, and the audience was wonderful.

Every time I give a slide presentation of my portfolio, I try to update it to include my latest work. Not only does it keep the talk fresh and up to date, but it gives me the opportunity to reinterpret some of the older images and sometimes see things in a new context.  Looking at some of the older images with a broader and more developed understanding of the work can provide new insights on what I’ve done in the past. In preparing for my talk at The Annenberg, I did something I’ve been meaning to do for a long time… 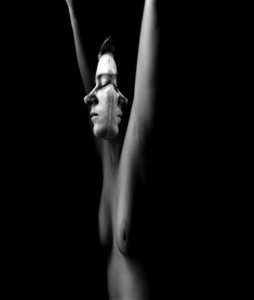 When I made the image I call “Dead Silences”, I was in my second year of grad school. In a critique with 8 fellow students and the professor, one student mentioned that it reminded them of a “Janus” face. Rather than admit that I had never heard of “Janus” before, I nodded in agreement with most of the other students who seemed to understand what this statement meant. I did however research it afterwards, and was surprised at just how accurate this observation was: 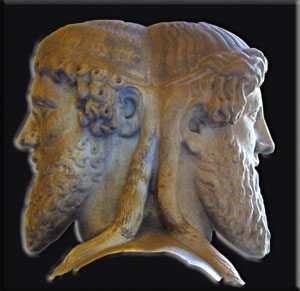 According to Wikipedia– “In ancient Roman religion and mythology, Janus is the god of beginnings and transitions, thence also of gates, doors, doorways, endings and time. He is usually a two-faced god since he looks to the future and the past.”

The resemblance of Janus in this image still fascinates me to this day, and was only the first of several instances in which one of my images resonated with an unintentional reference.

I had been thinking about this a lot since seeing the connection between one of my recent images and Masaccio’s “The Expulsion from the Garden of Eden”.  For the slide talk at The Annenberg, I thought it might be fun to illustrate some of the other inadvertent analogies that have appeared in some of my work…

This seemed like a good place to start.  I’ve always been inspired by Francis Bacon‘s work, so unlike Dead Silences and Janus I was aware of the connection here.  What excites me about this however is that I had not set out to make this image look so much like a Bacon piece.  As I mentioned in the blog post referenced above, when I go into a shoot, I don’t have an image in mind, or even an idea of what I want to convey.  Although I saw the connection immediately, I had not intended to create it.

The Bacon reference above was obvious to me without illustrating it with a side by side comparison, but I found seeing it and being able to show it to others was a lot more interesting than simply talking about it.  It made me look at some other images in my portfolio and think about other potential connections. 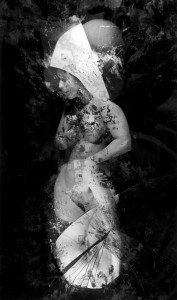 I’ve always felt that the figure in this image had a majestic air to her.  She seems to have a regal or royal quality, beautiful and yet vulnerable or delicate.  I’ve also felt like there was something egyptian about her, maybe due to her stance or that weird thing on her head that looks like a bizarre headdress.  I started doing Google image searches for “egyptian headdress” and was amazed at what came up: 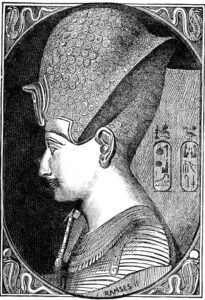 I LOVED seeing the relationship between these images!  I was thrilled at how much the “headdress” shape on the figure in my photograph resembled the ancient crowns of egyptian royalty!  In my excitement, I showed the connection to a friend, who thought of another extraordinary resemblance: 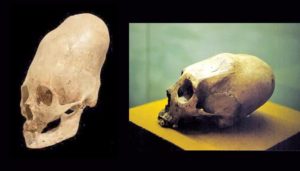 Apparently there is a body alteration practice common in ancient Mayan and Incan cultures called  “head binding”, in which the human skull is artificially and intentionally deformed.  This method of cranial deformation was done by binding wood and/or cloth to an infants head to distort its normal growth, and was most likely done to signify social status.  I thought this was such a bizarre relationship, and such a cool connection to something I’d never heard of!

Another recent image with an unintentional reference was this one taken just last year: 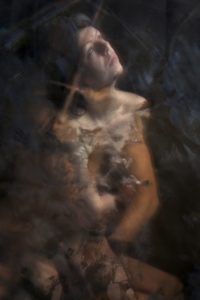 This was an early favorite color image of mine, and as with a lot of the recent color work photographing in the mirrors, I felt that it had an undeniably classical religious quality to it.  It specifically made me think of early Christian imagery.  The hands looking cut off gives the figure the feel of a martyr, and something about the gesture and the cross made by the scratches near the head reminded me of Joan of Arc.  It inspired me to do another Google image search for early images of Joan, and I was again thrilled by the results: 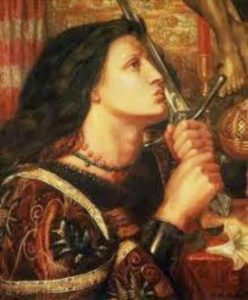 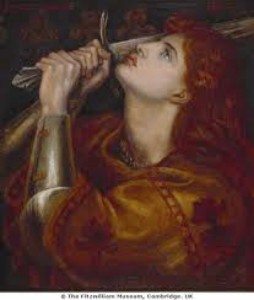 Seeing these made me reinterpret the “cross” by her head as more like the hilt of a sword.  This was a very cool discovery- not only do the scratches in the mirror resemble her sword, but it appears in the same vicinity as some of these other images I found- right near her head as she gazes towards the heavens.  Once again, I hadn’t set out to create an image that bore a likeness to Joan of Arc, it was only seeing it afterwards that I had the impression or feeling that it did.  Finding these other depictions helped illustrate just how much it resembled her likeness.

Jung believed that the primary content of the collective unconscious could be referred to as archetypes.  Similar to the idea of motifs in mythology, these archetypes are the themes, forms, or expressions that are universal to mankind, establishing a fundamental connection to people of all cultures and a link between past, present, and future.  When an artist expresses an archetype through a piece it is given form, form that is relevant and significant to the time.  According to Jung, artistic expressions that affect us deeply and that endure resonate from the collective unconscious.

When I began researching Jung and his theories on the collective unconscious, it explained the unintentional resemblance to the sometimes mythological iconography in my work.  These inadvertent connections to other symbols and forms in history and art make sense when I think of them this way.  In addition to giving context and understanding as to why these accidental connections have emerged in my work throughout the years, my studies of Jung and his theories have provided valuable motivation to continue making work.

2 thoughts on “Connections, Resemblances, and Associations”