It takes quite a bit to bring me to my knees these days, but the Metropolitan Opera‘s production of Lulu did just that.

Patricia, my wife, read a review in the NY Times raving about this season’s Met Opera production of “Lulu” by Berg. She immediately got us tickets for the Met broadcast at a local cinema. Reading the synopsis I couldn’t get past the small type at the top of the page that announced that the opera went on for FOUR hours! As soon as the curtain was lifted, however, I was mesmerized to see a stage filled with heavy ink drawings and projections immediately recalling the intense and demanding style of German Expressionism, an anti-realism style characterized by extreme distortions “to show an inner emotional reality rather than what is on the surface”. Large cut out hands and cylinders with crudely drawn features like oversized paper bag masks appeared incongruous and out of place. Yet these seemingly silly props were thin veneers covering the angst and foreboding that filled the set. Paper cut outs of Lulu’s intimate parts taped onto her clothes made her seem even more raw and naked than if she was actually without clothes. The fracturing nature of cubism and the sophisticated decorative approach of art deco were overladen with the weight and complexity of German Expressionism. 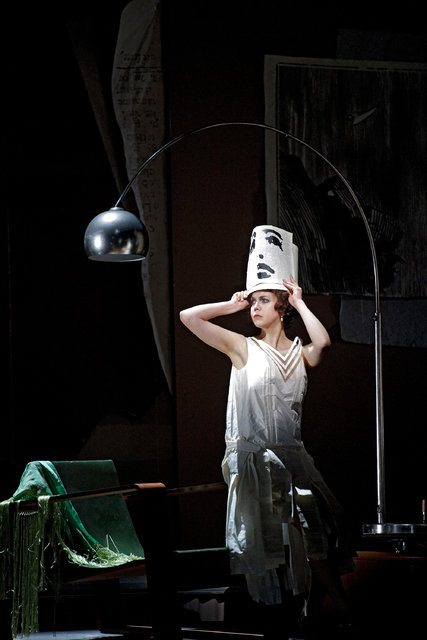 There was so much happening on the stage- intense projections, bizarre music, and of course the actions of the actors and singers. As if that was not enough, a mannequin-like figure on the side of the stage seemingly played the piano. Conjuring the seedy, dark and edgy cabarets in 1930’s Germany, this character interpreted and mimed the actions on the stage, often amplifying the intensely psychological qualities.

The visuals got me. Immediately and fully. The music, the strange “twelve tone technique,” which I know nothing about except that musicians cringe when it is mentioned, was indeed strange but interfaced perfectly with the eerie stage set. To cap off the entire experience, Marlis Petersen has perfected her role to the point where she seems to inhabit Lulu’s complex and grim psyche. Through her voice we could viscerally experience her fights, loves, deceptions, and despairs.

I enjoyed opera before this experience, but now I am hooked. At least for really excellent opera, such as those produced by the Met. Lulu stayed with me on a conscious level, but she also penetrated my psyche. I know this because my work immediately changed.

I had another binge shoot in January, six weeks after seeing Lulu, with Carl. We started off playing with different ideas and new directions. The resulting work recalls the strange reinterpretation of gestures, emotions and figures reminiscent of German Expressionism.

Redefining the body using the shape of mirror shards is not new for me; I have been doing it for years…

but this time feels different, and not only due to the inclusion of color. Perhaps it is coming from the impact of the breaking and shattering I experienced occurring on the set, in the music, and throughout the story of Lulu.

In any case, I find myself once again inadvertently bearing the influence of one of my art heroes – Kathe Kollowitz.

I have always been a fan of Kathe Kollowitz, a German artist working in the first part of the 20th century. Her work speaks of the tragedy of war and of the human condition. She would often divide the planes of the face into extreme geometric forms, transforming the external expression into a reflection of innermost concerns. 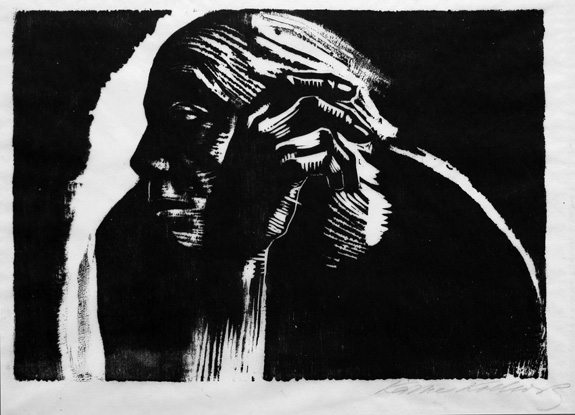 I’m still exploring this new work, and have been really drawn to it’s emotional and geometric qualities. The shapes of the mirror shards flatten the body, but within their reflections there is dimension and form, which is defined even further by the color. The texture of the particular mirrors I’ve been using also lends itself to the German Expressionist style, with scrapes and scratches that echo the dark, dense, and inky quality of the movement’s mark making.  Woking with one model instead of two seems to emphasis the deconstruction of the form, while the reconstruction is incomplete, marred, or extremely distorted.

I was so immersed and so captivated by the production of Lulu, so affected by the power of its expression, that it influenced my own work. To be influenced is to engage so deeply with a piece, with a work of art, that it becomes part of you, infecting your point of view, challenging values or just becoming a catalyst for opening yourself to greater experiences. Lulu did just that, and has since elevated my exploration working with the same materials and subject for over 30 years.

Brought To My Knees

One thought on “Brought To My Knees”