After the invention of the CON-traption solved many of the logistical issues involved with shooting in the pool, the biggest hurdle I faced was finding bodies to put in the water. Two of my go-to models that I had worked with for years had moved out of town, and this coincided with a relative scarcity of models in general. The solution was to invite Ruth, a student of mine at The Maine Media Workshops and a dear friend, to stay at the house and spend the week shooting intensively.  Our work together was so successful and productive that as soon as I had recovered I invited Carl, one of my regular models who moved away, to visit and shoot for a week.  This intense method of shooting has become a new way of working for me, and I have since come to refer to it as “binge-shooting”.

It literally took months to go through and edit all of the images from the pool shoots with Ruth and Carl (and I still feel like I’ve only scratched the surface).  By January of 2015 however, I was eager for more, and invited Carl to visit for another session of binge shooting…

With the pool – and the CON-traption– officially closed for the winter, it was back to photographing in the mirrors.  With Carl staying at the Imboden Compound, we would shoot at least two to three times a day.  While this was once again an exhausting amount to shoot in just one week’s time, the buildup of my visual acuity was remarkable due to the overall intensity. I found I needed less time to warm up- we would shoot in the morning, look at the work over lunch and discuss what was or wasn’t working, and jump right back into it. I loved how quickly I progressed, and I was thrilled with many of the images that resulted.

In the previous binge shooting sessions under the water, I had explored ways of bringing in different intensities of color and introducing more of it, something I had been working with in the proceeding mirror images.  This time, back to the mirrors, I was interested in experimenting with the darker, cooler tones I had grown fond of in the water images.  Eschewing the usual red gel in favor of a deeper blue filter to light one of the model’s, I found myself working with a ghastly palette in these reflections…

In Untitled #01-15-15-533, the blue gel over the light on the model behind the mirror echoes the underwater hues, rendering him entirely in cool tones.  The model in front of the mirror is lit more naturally, keeping the flesh realistic.  The quality of the blue is more dense than it was under the water, a little deeper and slightly less green, making those areas appear drained of life, putrified, or frostbitten.  With the bodies combined into one figure, the contrast with the warm flesh is not as viole 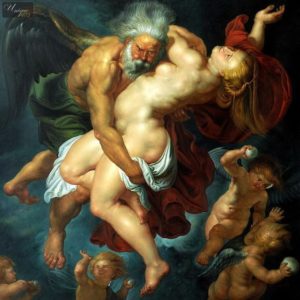 nt as it had been with the red filter, but is still unsettling.  To further change up the color palette, I swapped out the blue that had become an integral part of the backgrounds in the mirror images with the deep red of a large bath towel.  The resulting hue is lush, not quite as passionate or vibrant as that of the light through the red filter, and offers a sense of depth and space.  It is a rich, luxuriant red, like the drapery that appears in so much Renaissance imagery, leading me to refer to it as “Ruben’s Red” after the 16th century Flemish painter Peter Paul Rubens.  The red creates an environment, giving the background a sense of atmosphere.  Interestingly, I’m working with essentially the same color palette as the previous mirror work, except in these images using the blue as the primary color on the body and red as the background, instead of vice-versa.

Of course, this binge shooting session wouldn’t be complete without Ruth, who was not only eager and willing to participate in another intense week in front of the camera, but was able to overlap her visit for the same week that Carl was staying.  Suddenly finding myself working with an abundance of models, I was energized by everyone’s enthusiasm and we were photographing like crazy.  In Untitled #01-27-15-168, Ruth is behind the mirror and illuminated by the blue filtered strobe.  Her figure is at peace, again emanating a sense that she is drained of life, but this time the body tapers from a solid form towards a more ethereal state at the bottom.  The solemn embrace of the male figure is pensive, and the way their bodies line up between the mirrors is very precise.  I love the way Carl’s head seems to rest at the top of Ruth’s chest and neck, and the tenderness in the expression.  I also love where the lines of Ruth’s arm fade into and echo the folds of the red bath towel in such an interesting way on the left side.  The texture and marks on the mirrors surface integrate with both of the figures and contribute to the fading from solid to whispy forms.

As with the first week of “binge-shooting”, I’m overwhelmed by the amount of work we managed to produce in such a short period of time, and I still have a ton of editing to do.  There’s such a large crop of really quality images, these were just some of the first couple to really stand out.  I’m looking forward to getting more posted here soon before I’m completely buried by the next intense “binge-shooting” session!